There’s a theory that says to become truly accomplished at something (karate, painting, the cello) it takes at least 10,000 hours of practice. This holds true for winemaking, too, where in our case the hours are counted in decades, and one thing is undeniable: there are no shortcuts.

Our rich, complex 10,000 Hours reds are the culmination of that dedication. Each is deep, structured, and born of the famously exclusive Red Mountain terroir in eastern Washington, where the land and climate impart flavor characteristics like no other region in the world.

This combination of patient toil and perfect sun, soil and rainfall conditions result in Cabernet Sauvignon and Red Blend experiences that are meant to be savored, not rushed. Will you be able to taste the decades of passion and master craftsmanship that go into each bottle? Instantly.

Time is a force with which the winemaking process has an intimate relationship. It takes time to grow the grapes, harvest and ferment them, of course. Wine also mellows and becomes smoother when cellared, with the compositional changes contributing to a richer mouth feel and improved taste. Many wines benefit ever so slightly more by having just a bit of time to breathe. Time, it seems, is a key ingredient in winemaking.

Less obvious, though, is geologic time — the most extensive interval of this measure. As a force exerted over thousands of years, time has witnessed the movement and shaping of the Earth itself and, with certain glorious regions, composed the resulting formations of soils perfectly cast for extraordinary wine making.

Red Mountain, home to 10,000 Hours, is one such geologically storied region. Nearly 15,000 years ago, the receding glacial flood waters of Lake Missoula reconfigured the landscape with gently undulating slopes of sand, silt and gravel, and topped with nutrient rich soils with a granular consistency. This helps root systems to run deep for necessary nutrients that help wine grapes thrive.

The flood’s resulting topography provided Red Mountain with a southwestern slope, with an ideal relationship to the sun for extended exposure and warmth. The ripe tannins produced by these conditions are recognized as an innate characteristic of Red Mountain fruit in general, and 10,000 Hours Wines specifically.

Rain clouds spend very little time east of the Cascades, yielding a scant 5 inches of annual rainfall, with Red Mountain receiving nearly no precipitation at all during the growing season. This naturally arid climate allows us to control the amount of moisture to the vines, directing its benefits to the fruit rather than the canopy. This contains the scale of the grape clusters, adding intensity and richness to their flavor.

Red Mountain has been etched by the forces of time in a manner that almost purposefully anticipated the eventual art form called winemaking. For 10,000 Hours, one might rightfully say it’s time in a bottle.

Managing a vineyard and crafting wine are two disparate yet mutually dependent skill sets, inextricably tied to the goal of creating wine that makes as strong an impression on the palate as it does the memory.

At Red Mountain, this requires a profound knowledge of the terrain, soil and climate — including an informed appreciation of the sand, silt and rocky loam left behind by the Missoula floods. Likewise, one must be a maestro of phenolics and acidity to optimize the balance of old-world structure and newfound flavor profiles.

Our Vineyard Manager, Gianfranco Farimbella, and Consulting Winemaker, Joshua Maloney, are two such experts — with Red Mountain under their fingernails and the smell of grapes in the air they breathe. Their gifts are perfectly complementary, their passion runs deep, and their common aim is unwavering: to make the most sought-after wines in the world.

Perhaps Gianfranco says it best: “We could make a hundred thousand bottles of a wine. Or we could make something special.” 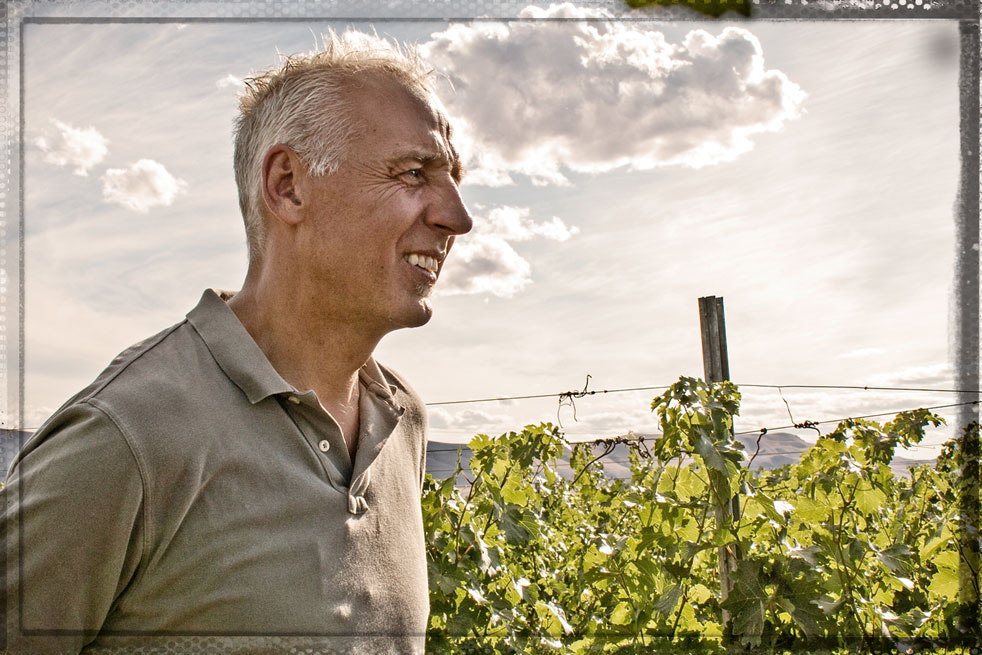 “Early on, I spent most of my time with my grandmother and uncles, farming in our small town of Franciacorta and then attending school for agriculture. Over the next 30 years I worked in different parts of Italy, including Lombardia and Toscana and Sardegna Island, and eventually ended up here in Benton City. I would say that I’ve spent over 33,000 hours becoming the agronomist I am today.”

“Since the early 90’s, I have spent more than 40,000 hours learning and refining my approach to winemaking. And, while I freely admit we aren’t plugging the ozone layer, I do believe what we do — making wine — makes the world a more joyful place.”